Home / Qanon / Q: Into the Storm — A Review of HBO’s Documentary
Return to Previous Page

Q: Into the Storm — A Review of HBO’s Documentary

Q: Into the Storm — A Review of HBO’s Documentary

I had no intention of watching HBO’s series on Q (Q: Into the Storm) but after reading a few observations from anons—some positive, some negative—I decided to watch the first two episodes. What follows is a review from someone who has followed Q from the beginning. I’ve read every post by Q more than once. I’ve read every linked document, watched every video Q has posted, and regularly visit the boards where the posts appear.

The film’s producer, Cullen Hoback, chose an interesting musical score for the series. The intro music and other songs that are featured give the film an eerie circus-of-the-bizarre feeling. I assume the choice of music was not random. Everything about the film from the lighting to the music portrays Q and his followers as members of a creepy movement with which no sane person would associate.

On the subject of sound, my list of complaints is long, but I’ll be brief. Hoback chose poor methods for recording his interviews. In many places, the voices of the interviewer or interviewee are inaudible. That problem is magnified by overlaying creepy music just when the film’s audio is lowest. The overall effect is confusion.

Documentaries don’t use actors or sets, but real people in their natural environments. Still, a good producer will use makeup, lighting, and camera angle to enhance the appearance of those who are interviewed. Hoback took a different approach. In most scenes, the subjects interviewed had no makeup, sat in dim lighting, and the camera angle made them appear frightening. This seems to have been intentional, adding to the surreal effect.

To his credit, Hoback enlisted people who’ve played key roles in the movement. I found his discussions with 8chan board owners FastJack and Paul Furber particularly helpful. I learned things about them I did not know.

Hoback spent an enormous amount of time digging into non-Q issues like GamerGate that cropped up on 4chan and 8chan prior to any appearance from Q. This allowed him to suggest that popular movements on 4chan and 8chan are propagated by cruel, amoral people. By extension, this includes Q. The intent here was to suggest that Q is just another sick online movement being run by malevolent actors. If you don’t frequent the boards, you wouldn’t know any different.

Jim Watkins, the owner of 8chan and 8kun, is prominently featured in the second episode, as is his son Ron (aka Codemonkey), who has served as the site administrator. Jim and Ron make the case that their website offers freedom of speech. To counter, Hoback rolls clips of nudity and other controversial images hoping to offend viewers who are accustomed to the filtered content of sites like Facebook, Twitter, and Instagram.

Frederick Brennan, the former owner of 8chan is brought in almost as an antihero. He acknowledges that he too, once thought freedom of speech was worth fighting for but explains how he came to his senses and realized liberty can be taken too far. Brennan insists the world’s problems stem from the public’s refusal to accept the mainstream media’s narratives. In Brennan’s view, sites like 8chan threaten public safety because they allow virtually anyone to express ideas outside the norm.

Hoback says the intent of the film is to reveal once and for all what Q is about—what do the cryptic messages mean, and what is their purpose?

Ever since Q began posting, opponents have portrayed him (or her) as a moral zealot obsessed with the idea that Hillary Clinton eats babies. This trope is found in the first couple paragraphs of nearly every mainstream article about Q. Hoback found a group of Q decoders willing to confirm this claim. I respect their passion for victims of child trafficking, but Q has never once claimed that Hillary Clinton eats babies. Most Q posts discuss FISA abuse, government corruption, corporate fraud, or media dishonesty.

Although Hoback does show a number of Q posts, none is explained other than a couple of proofs. There are no decodes. Q’s messages aren’t put into context and their meanings are not explored. Like every mainstream article, film, or investigative report, the goal is not to explain Q’s messages—it is to portray Q in the most negative light possible. Since opponents can’t talk to Q in person, they smear him by creating absurd caricatures of his followers and claim, “This is Qanon.” Hoback doesn’t deviate from the script. He does his best to portray those who endorse Q as oddballs and outcasts.

Jim Watkins is characterized as a malevolent entrepreneur who may secretly be feeding the bodies of his website’s users to a herd of pigs. Hoback suggests maybe he’s Q, though Watkins denies he is part of the Q team. (I know Jim personally and find him to be warm and sincere). Ron Watkins is portrayed as a socially awkward brainiac. He may be the only person who actually fits the film’s characterization. Craig James is shown as a devout Christian who lurks on porn-filled websites. In one scene, he discusses this matter with his wife but she says she trusts him. I’m sure Craig didn’t realize this, but Hoback included this scene to paint him as a religious hypocrite. (I know Craig and the characterization does not fit him).

Look no further than the opening scene if you want to learn Hoback’s agenda. The film claims that the January 6th incident at the Washington Capitol is “the storm” Q had promised for years. The message? Q followers are not just creepy and weird, but violent. Join the movement, and you may get a knock on your door from the FBI at 3 am. No one I know thought the Capitol incident was “the Storm.” The media have called it a Q-inspired insurrection, but video footage from that day shows members of leftist groups being led into the Capitol by security guards and a CNN reporter who appeared to be in on the caper.

Most of the people I know who follow Q are normal people with normal jobs—most are well educated. They work as nurses, physicians, attorneys, engineers, accountants, college professors, IT technicians, news broadcasters, and entrepreneurs. Many are former military. Some work for the federal government. But including them might negate the film’s purpose.

Hoback doesn’t just fail to explain Q, he fails to tell a coherent story. The interviews are brought together in a disjointed fashion. Little explanation is given as to why a particular person is relevant to the film. If you haven’t followed Q from the beginning and don’t know the roles of the interviewees, you’re likely to become lost in a celluloid menagerie.

You’ll never understand Q by listening to the media or filmmakers who despise his message. Q can’t be characterized by pointing a camera at his followers. The only way to understand Q is to read the posts and do the research. You must connect the dots yourself.

Despite the film’s failings, it will, no doubt, draw more attention to the movement. Every attempt to discredit Q to date has only created more followers. The Streisand effect always pays its dividends.

Although Amazon has blacklisted my Q books, they are available here. 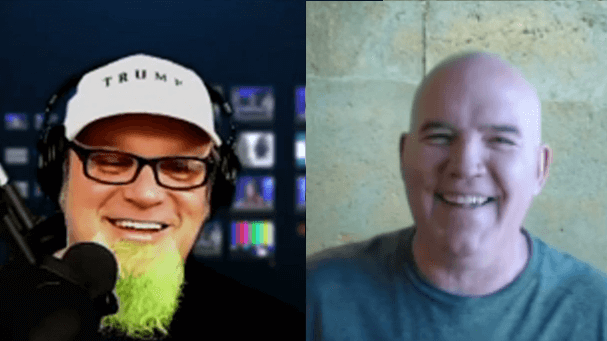